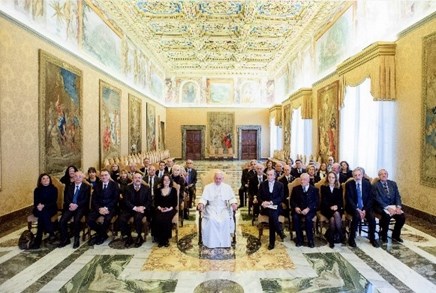 On the 28th of January 2016, Pope Francis has received for an audience the members of the Italian Committee for Bioethics of the Presidency of the Council of Ministers presided by Professor Lorenzo d’ Avack at the Consistory Hall.

Professor d’ Avack, having expressed a heartfelt thanks to the Holy Father on behalf of all the members of the Committee for having conceded the audience (it has been the first audienceto be granted to the Italian Committee for Bioethics), has retraced all the principal stages of the history of the Committee starting from 1990, the year in which it has been founded. Professor has remarked all the duties carried out by the Committee and he has focused in particular on the elaboration of Opinions which are addressed to the society and to the political entourage even in order to orientate the formulation of legislative acts and always keeping the orientation towards the safeguard of fundamental rights and the values as they are expressed.

During the past 25 years the Committee has published more than 150 documents regarding bioethical topics which are deemed to be mostly relevant for nowadays society: the beginning and the end of life, the medical bioethics, the conditions and the protection of women and of most vulnerable people (minors, elderlies, incapable people, detainees, poor people living in poor countries etc.); the topic of emerging or so-called “border” technologies; frequently remarked considerations on the human intervention on the environment, on the flora and on the fauna.

Professor d’Avack, in addition to the promotion of a stronger synergy with European and International institutions, has drawn the attention on the fact that the relation with new generations has been strengthened, even through the organization of the “Conference for Schools” which took place in different Italian cities in order to discuss the most topical bioethical issues together with young people.                              At the end of his speech, Professor d’ Avack, has given to the Holy Father all the publications containing the most recent opinions of the National Committee for Bioethics.

the speech of Pope Francis

Address of His Holiness Pope Francis
to the National Bioethics Committee

I warmly welcome all of you, and I thank President Prof. d’Avack for the kind words with which he introduced our meeting.

I am glad to express the Church’s appreciation to the fact that the National Bioethics Committee was established in Italy, at the Presidency of the Council of Ministers, more than 25 years ago. Everyone is aware of how sensitive the Church is to ethical issues. However, not everybody notices that the Church does not claim any privileged space in this field. On the contrary, it is satisfied when the civil conscience, at different levels, is able to reflect, distinguish and operate on the basis of free and open rationality, and fundamental values of the individual and the society. In fact, this responsible civic maturity is the sign that the announcement of the Gospel- this one revealed and entrusted to the Church- is bearing fruit, succeeding in promoting the research of the truth, the good and the beauty in complex human and ethical issues.

Essentially, it consists of serving the whole mankind, men and women - as was recalled- with particular care and attention for the most vulnerable and disadvantaged individuals, who struggle to make their voice heard, or still cannot or no longer can have it heard. The Church and the civil community meet and collaborate on this field according to their respective and specific commitment.

This Committee dealt more than once with the respect for the integrity of the human being and the protection of health from conception to natural death, considering the person, in his singularity, always as an end and never simply as a means. This ethical principle is also important with regard to biotechnological applications in the medical field, which can never be used in a way that is harmful to human dignity and never be guided solely by industrial and commercial purposes.

Bioethics was born to compare, through critical effort, the reasons and conditions required by the human dignity with the developments of science and biological and medical technologies, which, progressing at such a fast pace, risk to focus only on utility and profit.

How difficult identifying such reasons may be at times, and in how many different ways they are argued, is evidenced by the Opinions formulated by the National Bioethics Committee. Therefore, the commitment for the challenging research of the ethical truth needs to be attributed to those who worked at it, especially in a field marked by relativism and not very confident in the capacity of human reason. You are all aware that this research on complex bioethical issues is not easy, and a harmonious conclusion is not always rapidly reached. This conclusion requires humility and realism and does not fear debate between opposite positions. Finally, witnessing the truth contributes to the maturation of the civil consciousness.

In particular, I would like to encourage your work in specific areas which I briefly recall.

Finally, I would like to express my appreciation given your Committee has sought to identify strategies in order to stimulate public awareness, starting from school, on bioethics issues, such as the understanding of biotechnological progress.

Distinguished Ladies and Gentlemen, thank you for your visit and for this moment of reflection and encounter. God bless each one of you and your valuable work. I promise I will remember all of you in my prayers and I trust that you will do the same for me. Thank you.